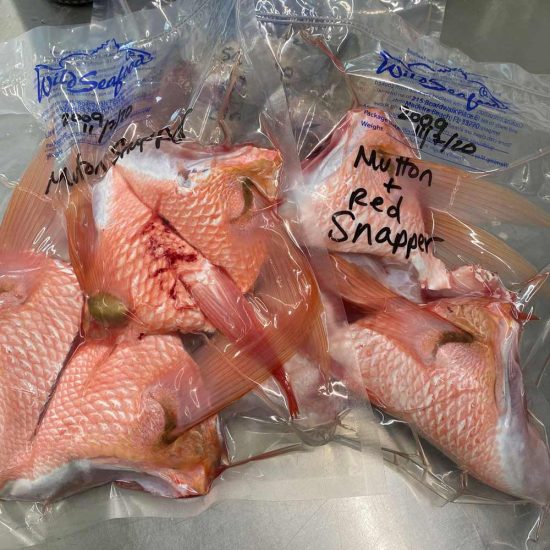 Fish prices are per pound of the whole fish. The average pound of whole fish will yield 35% once filleted.

Our shipping coolers can hold 10 LBS of whole fish. If you order 11 LBS, we will need to use two coolers and you will be charged for both coolers. Thus, we recommend getting your total order weight close to increments of 10 LBS.

Price listed as per pound.

What are fish collars?

Fish collars are the pork shoulder of the fish, meaning it is where all the other parts of the fish meet, and as a majority of animals is where most of the flavor resides.  It’s long been a staple in Asian seafood markets, however, those in the United States are only beginning to discover its multitude of applications.  For the most part, the meat is procured by cutting from along the clavicle, right behind the gills, and runs from top to bottom, including the organism’s pectoral fins. Though it’s generally harder to obtain at your average supermarket here at Wild Seafood Co. we do the work for you to provide the freshest fish collar around.

How to eat fish collars

The meat that makes up fish collars is white and tender perfect for grilling, frying, or making fish stock. When cooked properly it’s known to fall right off the cartilage though chopsticks can be used to gently remove the meat as well. Furthermore, it has the benefit of not having to dance around or avoid any smaller pieces of bone.  This mouthwatering piece of fish is generally looked over but best when coming from larger species such as yellowtail or salmon. Its most famous use is in a popular Japanese dish known as hamachi kama, which is simply broiled yellowtail fish collars.

When preparing fish collars it’s best to grill them in order to produce their natural, deliciously rich flavor. One of our favorite grilled fish recipes can be described in three easy steps and a multitude of species can be used such as salmon, grouper, or snapper. To begin, you’ll want to put the collars in freezer bags, adding garlic, a variety of dried herbs, ground black pepper or lemon pepper, salt, and olive oil. This mixture works to marinate the fish collars and needs to sit for a minimum of 1 hour, or preferably overnight, in the fridge for maximum flavor. Next, you’ll want to lay the collars on the grill skin side up and grill on high heat with the cover open for around 5 minutes. After you’ll turn the collars and repeat on the opposite side. Last but not least is plating your succulent fish collars with lemon wedges on the side and enjoy!

Wild Seafood Co. brings both fresh and reasonably priced seafood right off our Florida coast to your table, keeping our product strictly natural and unprocessed for your taste buds. Most overlook fish collars since they’re slightly trickier to eat but we assure you it’s not a meal you will regret. Given that fillets are more mainstream they’re also much more expensive, with salmon going as high as $12 per pound in some supermarket seafood aisles such as Whole Foods. In contrast, Wild Seafood Co. brings you this scrumptious, omega-rich, and financially modest meal for only $3 per pound!  This product comes fresh-frozen from our local waters and comes in 1lb variety packages of Grouper and Snappers. Each pack can contain from 2 to 4 collars per pound.